After its recent renovations, Winston-Salem’s Passageway Park connects more than just Trade Street and Cherry Street. The Passageway was built in 1974 complete with a contemporary, postmodern feel—and lots and lots of concrete. After its restoration, which completed in June 2018, the Passageway is an “urban oasis” where events can be held, folks can get to the bus station on Trade Street or the hotels on Cherry Street, and passersby can stop to appreciate the fresh landscape architecture of the space. 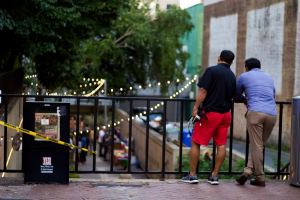 Following its creation in the 1970’s, the Passageway saw an increase in drug use and public urination in the space. Blind corners made the area unsafe, poor drainage made storm water stand still in the area, and concrete radiated heat. In the fall of 2015, the Downtown Winston-Salem Partnership saw these problems and decided to act. “It was just so inhuman,” said Jason Thiel, President of the Downtown Winston-Salem Partnership.

The inspiration for the recent revitalization of the Passageway actually begins on a Trade Street before buildings were constructed and before there was even a road. It probably looked a little like this: a prairie landscape with tall grasses flowing in the wind, pockets of forest, and birds flying from tree to tree. It is a space with movement and air.

But, then, the people move in. Winston-Salem is established. Those grasses and wild trees are replaced by smokestacks and a city skyline.

Suddenly, it’s 1974, and Trade Street is closed off to cars in an attempt to build Trade Street Mall, a pedestrian retail center. As a part of these efforts, the passageway is built. 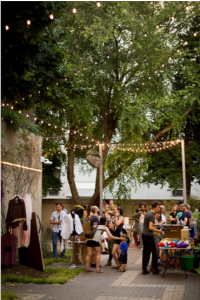 Now, the revitalization has given the Passageway movement and ecology that make it more similar to what it might have felt like centuries ago. Not only is the Passageway more suitable for daily use, it has also become a place where creativity can flourish. A puppet show last Thursday night drew a crowd of people from all walks of life; a stroll through the passageway displayed live music, beer, unique art, and a vibrant group of people.

There is more to come in the future, too. According to Thiel, food carts, music, and a mural renovation are all hopes for the space. He emphasizes, too, that positive change can be simple. “Sometimes it can just be taking a space that is very difficult and making it human– humanly accessible,” says Thiel.

Since the project began, the focus has been on humans. Kristen Haaf, Director of Urban Planning at Roots First, a landscape architecture company, conducted research on the space by watching how people were moving through the Passageway. The Downtown Winston-Salem Partnership, Roots First, Osgood Landscape Architecture, and other stakeholders sat down to identify what the community wanted to see happen to the space. “It’s largely this participatory design influence project where we as designers weren’t saying, ‘This is what we think you should go and do,’ but we as designers asking a bunch of questions and listening to the voices of the people in the city,” said Joel Osgood, Registered Landscape Architect of Osgood Landscape Architecture.

The project was funded by private foundations, individuals, and the Downtown Business Improvement District. With a budget of $200,000, Osgood, Roots First, and the Partnership collaborated to remove some of the concrete from the space, add mirrors to prevent blind corners, hang warm string lights above the space, and, most notably, incorporate green plants into the space.

So, how can plants make a space feel more human? “It all became about movement. It wasn’t about just sitting in this stale, underutilized space. It was activating it into motion,” says Osgood, “Picking grass species that would blow in the wind and relate back to a prairie-style that may have been in downtown Winston-Salem before it was reactivated with all these buildings– that historic and ecological context became important as part of a narrative that we were trying to inspire.” 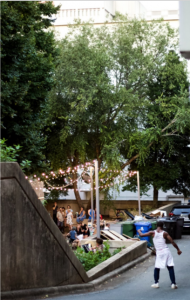 Plants in an urban space take people by surprise. Osgood says that landscape architecture is attractive because “it’s trying to create this dramatic pause in the existence of people that pass through a space.”

James Nelson, a valet for the hotel on Cherry Street, recognizes the change in the space. Nelson has lived in Winston-Salem his whole life and has used the Passageway daily for years, as he walks from Cherry to Trade on his lunch break and then back through again when his break is over. “It’s got some taste to it now,” he says.