One overcast September evening, trombonist Cameron MacManus waited patiently outside the Stevens Center, despite an imminent downpour. As other members of the Camel City Jazz Orchestra arrived, he helped carry instruments inside. It was time for practice.

The Camel City Jazz Orchestra is a registered non-profit organization with a mission: to surpass one’s expectations for the standard performance-based musical group, instead seeking to reach out directly to local music lovers of all ages.

According to their website’s mission statement, they look to utilize their skills as musicians to augment local music education and community feeling, while simultaneously promoting their own unique and precise brand of jazz. The organization has grown a great deal in both size and popularity since its inception in January of 2012, but its goals and values remain very much the same.

“It’s always been about playing the music that we love for as many people as we can,” said Matt Kosma, the orchestra’s co-founder and artistic director. “It’s as simple as that.” He described the loyalty shown by the band’s members, saying many of them have been there since its founding.

Kosma founded the organization with his wife, Jill S. Stricklin, who serves as the orchestra’s executive director. Responsibilities are split per skill set: Kosma, a proficient saxophonist, handles many of the musical aspects of the orchestra’s operations, including choosing music and rehearsing with band members. Stricklin, who works in employment law, handles the administrative side, striving alongside the orchestra’s board of directors to coordinate events and secure funding.

Per the orchestra’s website, they partner with many local Winston-Salem organizations on events, including the Winston-Salem Arts Council, the jazz radio station WSNC, and the Southeastern Center for Contemporary Art.

Their next public event is their seventh annual holiday concert, on Dec. 20 at the Ramkat in downtown Winston-Salem. 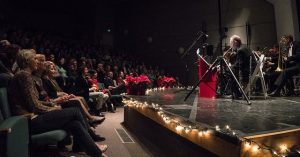 Kosma said the organization has worked on educational outreach with the University of North Carolina School of the Arts Community Music School to organize and educate youth jazz combos made up of middle and high school students. The combos consisted of small groups of four to five students taking lessons in the Stevens Center from MacManus, artistic director at the community music school. MacManus said that the orchestra aims to broaden the scope of its future education initiatives, and focus on giving private lessons to younger local children.

According to Stricklin, one of the orchestra’s most effective community-based initiatives occurred back in 2015, when they played a series of Sunday concerts at city parks downtown, including Bailey Park and Winston Square Park. Four band members, Cameron MacManus, Jay Meachum, Christina Hankins and Michael Kinchen composed the Neighborhood Suites, four original jazz pieces corresponding to four equally divided quadrants stemming from downtown: the north, south, east, and west sides.

“A lot of people have no idea how massive that area [the south side] of town is,” MacManus said.

Macmanus attempted to represent the higher ethnic diversity of the region by incorporating elements of Latin and R&B into the score.

Stricklin said that the turnout at the concerts was high, packing the parks near to the brim. She said that she observed audience members of all ages in attendance.

“[It was]…specifically designed develop community and reach out to new audiences,” said Stricklin, “We wanted to broaden the appeal to everybody, and I think we did.”

However, she made it clear that the organization’s work is far from finished. Every day the orchestra continues its efforts to raise money and increase outreach, both educational and musical, to all local music fans.

The following is a video of one of the group’s performances. More are available for your listening pleasure on their website: