The building at 418 N. Marshall St., most known as the location of the Winston-Salem Journal, and the parking lot across the street have recently been purchased by local name developers Bill Benton and Leslie “Bud” Baker. 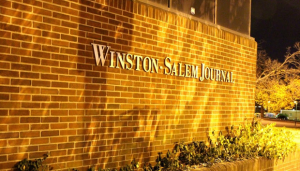 Miller said the Winston-Salem Journal is not interested in leaving downtown.

“There is vacant downtown office space, but I am not part of the team evaluating these properties,” said Miller. Miller did not provide a time frame as to when the Winston-Salem Journal will be deciding if they will be staying or bringing their business elsewhere.

Benton and Baker both are well established businessmen in the Winston-Salem community. Benton has been highly involved in senior housing projects as well as commercial real estate. Baker retired as an established figure at Wachovia Corp, being chief executive officer for seven years and involved in the corporation for over thirty years.

Benton said the oldest part of the building was built in 1926, designed to look like Independence Hall in Philadelphia. A small addition was added in 1958 and the most recent office space was built in 1982. This building is located directly behind the Stevens Center, the main arts venue for University of North Carolina School of the Arts, and is centrally located in downtown Winston-Salem. 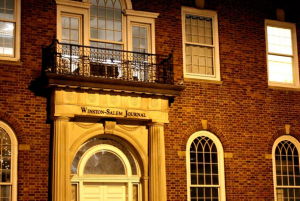 According to Benton, the Winston-Salem Journal now occupies two floors of the section of the building that was built in 1982.

Benton described his recent purchase of this building as an opportunity to bring more of an arts community to the center of downtown Winston-Salem. As an advocate for the arts, Benton foresees an expansion of the arts as a “tremendous benefit for downtown.”

Benton spoke of possibility collaborating with individuals at the Stevens Center, joining together to promote the arts. The Stevens Center arts venue is often used by the Winston-Salem Symphony, Opera programs and seats more than 1,300.

Lauren Whitaker, News Services Manager of the Stevens Center said “The Stevens Center has long been the centerpiece for arts development downtown. We look forward to partnering with our new neighbors to enhance the cultural offerings in our city center.”

Next: Earthbound Arts: The Story of Lucy & Gordon