Courtrooms dating back to 1926 are now home to city residents wanting to live in central downtown Winston-Salem, all made possible with the renovation of the former county courthouse building into a new apartments complex.

Chad Harris, 50 West Fourth resident, moved into his apartment May 30th. Working in Clemmons, this is Harris’ first time living downtown. “I’ve always wanted to live in downtown Winston-Salem and this year I just decided to do it,” Harris said. “I love attending the plays downtown. I make it a point to regularly go to the amphitheater downtown as well.” 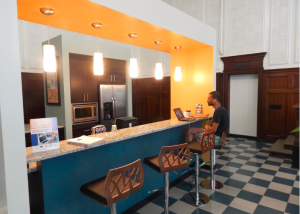 Chad Harris, 50 West Fourth resident in the Amenities Room of the complex

Foster predicts more people with a “live, work, play mentality” will be moving downtown as she sees the demand for downtown housing as growing and changing.

The apartments at 50 West Fourth range in price from $850 to $1,650 a month. Along with living downtown comes a larger expense but Foster concluded by saying, “you get what you pay for.” For example, living in the center of downtown Winston-Salem, 50 West Fourth residents rarely have to drive to get anywhere, said Foster. 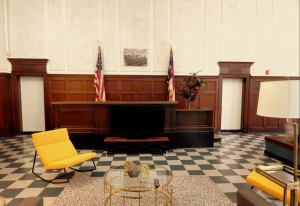 In order to accommodate, Clachan Properties named this former main courtroom the Amenities Room of the apartment complex and built separate units for a leasing office and fitness center as well as a bar and entertainment center within the walls of the former courtroom. Wilds said the retained courtroom elements allow individuals to “still get a sense of the courtroom” when walking into the Amenities Room.

Other retained elements include original walls and windows within the individual apartments, the cast-iron staircase and the original lobby areas and entries that were added when the building expanded in 1960, according to Foster. 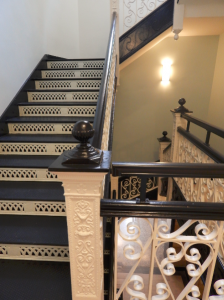 The walls of the building are decorated with a historic timeline of pictures from the days of the operating 4th Street Forsyth County Courthouse.

Some contemporary features were permitted as part of the renovation process, “additional windows were added as well as skylights,” explained Wilds. He also mentioned that unlike the original main courtroom, smaller courtroom was divided into housing units.

Foster went on to say, “We had never done a courthouse renovation before” but overall, “it has been a huge success.”

Next: Exploring Winston Square Park Through A Camera Lens