Column: The Statue Debate is Far from Over 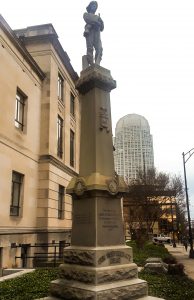 On the corner of West Fourth Street and North Liberty Street in downtown Winston-Salem, a tall stone pedestal stands with a rigid sculpture of a soldier at its peak. Its solemn epigraph is as follows: “Our Confederate Dead.”

The statue has existed there for over 100 years, and to many it is simply another background fixture of the downtown landscape, like the colorful murals, the trees, or the sidewalks. As I read about the fiery debates surrounding Silent Sam, the Confederate memorial at the University of North Carolina in Chapel Hill, I couldn’t get the image of the downtown statue out of my head.

Silent Sam no longer stands on the university’s upper quad, as protestors toppled it over on Aug. 20. UNC’s Board of Trustees proposed a new site for the monument on Dec. 3, inside a new history and education center that would cost about $5.3 million to build. This proposal was called “sheer cowardice” by UNC Board of Governors member Thom Goolsby, and has been the subject of protests and social media outrage throughout Chapel Hill.

I noticed an interesting contrast during my reporting for this piece, part of which I spent planted next to the statue in Winston-Salem to get the perspective of passers-by. I noticed that people seemed reluctant to discuss it: few were willing to talk at all, and no one offered much in-depth reasoning to their brief answers. Some admitted to not even noticing it was there. Confused by this relatively lukewarm reaction a mere 78 miles away from Chapel Hill, I decided to get some background information on the monument.

Erected in 1905, the memorial was planned and funded by the James B. Gordon chapter of the United Daughters of the Confederacy, a non-profit heritage organization first formed in 1894 in Nashville, Tenn. Their website states that they aim to honor the memory of soldiers who served the Confederate cause. Historically, they have done considerable work towards this, as shown by the over 400 local monuments established throughout southern states by the organization’s many chapters and divisions.

The UDC does claim to have good intentions. Their President General Patricia Bryson put out a statement nine days after the violent protest that injured 19 and killed one in Charlottesville, Va. saying the monument in Winston-Salem serves as a memorial to their fallen ancestors. She also denounced white supremacy, imploring such groups to cease using Confederate symbols for their ends.

When I first read that statement off their website, their stance seemed solid to me. Approximately 620,000 died during the Civil War, about 258,000 of which were Confederate soldiers. It seems callous to completely dismiss the idea of memorializing such a hefty loss of life.

Before I took this message at face value, however, I decided to try to learn more about the UDC. My search took me to Assistant Professor Alisha Hines of Wake Forest University’s History department, who provided valuable context about the founding of the organization.

The consensus among historians is that the group, and other heritage organizations like it, formed in the wake of the period of radical congressionally-mandated reconstruction on the former Confederate states from 1863-1877. Professor Hines said that it came with a backlash that arose in southern states against federal attempts to reform the south and to improve the social status of the many newly-freed African-Americans. This reaction included poll taxes, grandfather clauses and other measures intended to keep them from voting, unimpeded lynchings and other grotesque acts of violence, and the emergence of the Ku Klux Klan.

Professor Hines also said that the UDC is a proponent of the “Lost Cause” ideology, an attempted reframing of the Civil War as a conflict over states’ rights, rather than slavery.

My thoughts instantly turned to my grandfather, an avid Civil War buff who spent decades practicing law in Elkins, WV. My family would visit his home every year throughout my childhood, and I remember numerous evenings spent sitting on a hand-knit rug by the fireplace listening to him regale my parents and grandmother with tidbits about the war and people’s attitudes towards it. With a twinkle in his eye he would mock the idea of preserving such a whitewashed legacy, ironically refer to the conflict as “the war of northern aggression.”

Because this issue is so complex, I hesitate to use blanket terms to label it. However, in this case I feel it is appropriate to say that this “lost cause” revisionism propagated by the UDC is offensive and harmful. It insults those whose ancestors experienced the horrors of slavery, diminishing their experiences and promoting further racial division and alienation throughout the United States. While this context irrevocably damages the UDC’s credibility, I still was not sure if that necessarily justified calling all Confederate monuments equally damaging, and saying they deserve to be torn down.

“Removing [Confederate Monuments] means eliminating a rallying point for present-day assertions of white supremacy. But it is not enough simply to take the monuments down and expect the historical conditions that put them there to likewise disappear,” they said. “Another option is to find ways to learn from them in order to prevent the rise of the societies and ideologies they were intended to extol.”

I managed to get in touch with Dr. Blee, who helped clarify to me why she said monuments hold such power. She said their everlasting and public nature cause them to express the inherent unchanging values and beliefs of a society. On the other hand, something like a museum exhibit, for example, displays the values of a society from the past, thus educating the public.

Professor Hines agrees with this idea, and suggested that working to contextualize the memorials for the public could lead to a peaceful resolution. She said that the best way to decide what to do with these symbols would be to let locals debate over the future of an individual monument to decide whether it is detrimental to their community.

The officials at UNC are clearly taking this education-based solution, but the hefty cost of the project indicates that they don’t really seem to be paying much heed to the desires of the community.

I can’t help but speculate as to what my grandfather would think about the current debates. He was a man that was very in tune with the attitudes of his home in West Virginia, so I expect that he would judge the heated debates in Chapel Hill and the cooler atmosphere in Winston-Salem with the method he used to study the Civil War: always paying attention to historical context while keeping people’s feelings in mind.