With its bus station, office towers, and coffee shops, downtown makes an ideal place to take the pulse of the city’s electorate. Heard it Here staffers spent the day, mostly downtown, interviewing voters — and those who don’t vote — to find out what’s on their minds. We also went to the East Winston Heritage Center polling place on East 7th Street, where many downtown residents vote. Here are their stories.

A loyal constituent supports her congresswoman

Priscilla Reid stood out among the other campaigners waiting outside the East Winston Heritage Center this afternoon. Of the five people outside, she was the only one campaigning on behalf of the Republican Party. She passed out fliers that advised people to vote straight ticket Republican and her bright red shirt read “I am in the Foxx’s Lair because I know she cares.”

Reid, a mother, grandmother, and great-grandmother, is retired from the city’s transit authority and devotes her time to taking care of her mother and campaigning for the Congressional candidate who has helped her family.

“Virginia Foxx is a candidate I support and that is because when my father died and I first applied for Veterans Affairs for my mother, the people at the VA were terrible, they just didn’t care,” said Reid.

Reid shared the ways in which she felt the VA ignored her requests for help when her family was in a time of stress, ultimately denying her request for benefits in the 2014-2015 term. After this, she began to reach out to different congressmen and women without success, saying that “nobody seemed to care.”

This was until she reached out to Virginia Foxx. “When I got in touch with Virginia Foxx’s office, she went to work for us and we got all our mother’s benefits,” Reid said. “And now when we send our paperwork, we don’t have a problem with the VA anymore.”

“I would love to see her stay in office so she can help more people,” said Reid.

Though Reid was campaigning at the Heritage Center this afternoon, she cast her vote earlier in the day. “Voting is important for me because that is the only way we can make things better,” said Reid.

“Go to the ballot box, do what you’re going to do, and let’s see what happens,” said Reid. “This is just as important as voting for the president.”

Even with turnout expected to be higher than in 2014, many eligible voters did not vote in this election. Heard It Here staffers talked to some of these nonvoters at the central bus station and outside Camino Bakery on Fourth Street: Andrew Ray, Savannah Foster, Christian Robinson. This originally aired on WFDD’s All Things Considered on November 6.

Produced by Katherine Laws and William May 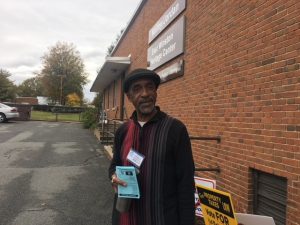 Outside of the East Winston Heritage Center, Phillip Carter was campaigning for the Democratic Party. Noticing that interviews were being given, he eagerly stepped up wanting to share his opinions on the ballots this year.

Carter was the precinct chair of the Heritage Center. His desire for turnout was for the Democrats to take over positions in the North Carolina legislature.

“For me, it’s about the issues are the bonds and amendments, and quite naturally by being a Democrat, I would hope that the Democrats would sweep our general legislature.”

The bonds were of grave concern for Carter. He felt that the language used to describe the bonds wasn’t clear enough and didn’t explain where the money would be spent or exactly how.

“My number one concern is the bonds on the ballot – they’re very ambiguous. In some areas, they speak directly to what they’re going to do and the amount of money that is being spent, and in other areas, they’re not very direct.”

In addition to the language potentially perplexing readers, Carter felt that the bonds would not be used in a way that would benefit the minority community.

“Also some areas where bonds are being spent, I feel that it might lead to gentrification – the displacement of minorities. I think in some areas the money isn’t being applied where it could better be used.”

Carter further explained that the voter ID amendment and tax cap were also not in the best interest of the minority community. He felt that the amendment reducing the North Carolina tax to a maximum of 7% would inevitably hurt minorities in the long run.

“I’m definitely against the voter ID amendment and the tax cap. The reason I’m against the tax cap is because usually if you do this, you have to cut programs – usually minority programs – and transfer that money to constructions to roads or highways, or maybe even education.”

Kyle Cameron, 26, woke up this morning eager to vote in his first midterm election. But as someone who doesn’t vote regularly, he had trouble finding his precinct and had to put off voting until this evening, after work. However, by the time Cameron had gotten off of work, the polls had closed.

An avowed skeptic, he was going to vote for any third-party candidates on his ballot to “break up the two-party system.”

Cameron is a local kombucha brewer who considers himself “a simple guy” who just lives day to day. Cameron has been political curious since 2016 when he voted for the first time. Politically, he puts himself more with the Libertarian Party but is skeptical of organized political parties and the two-party system.

The 2016 Presidential election mobilized Cameron to be more engaged politically. “The stakes seemed higher,” said Cameron. Cameron was a supporter of Presidential candidate Bernie Sanders. “We were seeing somebody who was a decent person who was running for office which doesn’t usually happen,” said Cameron.

While Cameron didn’t feel strongly about any candidates or issues this election cycle, he still planned to vote. “Finding information on people on the ballot, which was quite a list, was difficult,” said Cameron. “I also didn’t set enough time before today to really dig into the ballot.”

While Cameron doesn’t see politics affecting his daily life beyond taxes, he sees the importance of politics. As he has grown older, he has realized how politics affects people of the community, especially local races.

“I am starting to see the importance of voting for smaller people that have more of an effect on the immediate community, said Cameron. He said he now sees that midterms are as important as presidential elections.

Cameron remains critical of the political system. “There is so much information that I am wary of what I believe when I hear things, so I kind of just keep to myself and be there for people at the individual level.”

Given this, Cameron said he still sees himself being more engaged with the next general election. “I will be more educated and have a better idea of what I want to do politically.”