*Because of the nature of illicit drugs and the possible legal implications for those who use them, the staffers of Heard It Here have decided to change the names of these individuals in order to protect their identity.

Anna* stood under the blue awning at 665 W. Fourth St. with a pack of Pall Mall cigarettes in hand as she waited for her turn. In the window, behind her shoulder, a blue sheet of paper with black typeface read: Congregating in front of the building is not allowed. 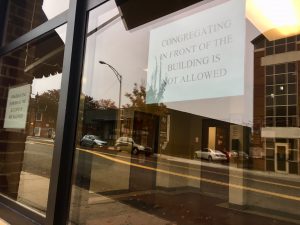 Every day except Sunday for the past two years, the 31-year-old has come to Insight Human Services, Inc. for a “dosing” of methadone for her heroin addiction. In addition to being treated through medication-assisted therapy, Anna attends five “group” sessions per week.

“This place saved my life,” Anna said. “I was going to overdose on heroin and this place helped me get clean. It wasn’t easy.”

Its corporate center and clinic in downtown Winston-Salem has been there for nearly 20 years. At the Fourth Street location alone, Insight Human Services typically treats about 1,100 adults and adolescents per year, according to Vice President of Communications Robin Lindner.

“Hours, times, sessions, and medication administration, as well as payment or billing methods, vary from client to client – depending on his/her prescribed treatment and/or financial situation,” said Lindner in an email.

At 11 o’clock on a gray Monday morning, clients shuffled in and out of Insight. At one moment two or three individuals talked to one another under the blue awnings. Later, three or four groups of people spread in front of the building chatted with one another before entering the building.

According to the North Carolina Department of Health and Human Services, from 1999 to 2016, more than 12,000 North Carolinians died from opioid-related overdoses. The majority of these were unintentional overdoses. Since 2010, specifically heroin-related deaths have rapidly increased, according to the June 2017 Opioid-related Overdoses fact sheet. 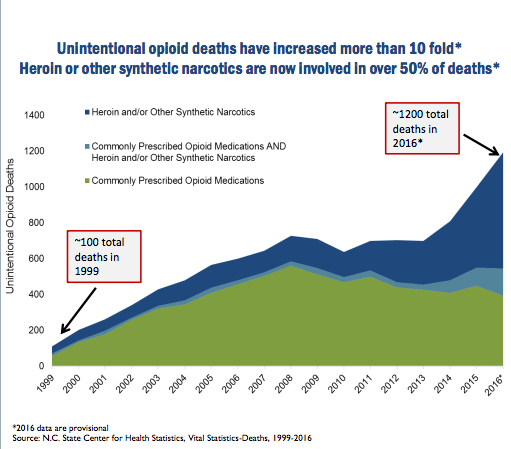 “There is an increase in opioid addiction,” said Lindner. “But we’ve been dealing with it for years before it was even in the news. For us, it’s a daily reality. Before there were opioids there was meth. Before that we were dealing with crack cocaine. Our level of clients doesn’t necessarily change with drug trends because there is always a new drug.”

Even while seeking treatment to help with addiction, some clients say that they can fall victim to a new array of drugs.

“This place can be good–it can be. But the thing is, that’s if you’re coming in, going to group, dosing and leaving,” said 28-year-old Sarah*, who said she has been coming to Insight for about a year and a half.

“When you come out here and get mixed in with a bunch of shit, honestly, it can be pretty bad,” she continued. “It can mess up your social life; you get introduced to other drugs because of people that are out here. I had never even seen methamphetamines ever in my life until I started here.”

Lindner said she could not discuss individual cases and notes that there is no guarantee that Sarah and those who milled in front of the building are clients of Insight who are actively pursuing recovery.

According to the National Drug Intelligence Center’s Methadone Fast Facts, methadone is a synthetic narcotic. It is used to treat an addiction to narcotics and can suppress withdrawal symptoms for 24 to 36 hours. Methadone only serves as a treatment, not a cure, for addiction.

Both Sarah and Anna said they were being treated for their opioid addiction with methadone through medication-assisted therapy as well as group counseling sessions.

The U.S. Food and Drug Administration (FDA) released a comprehensive Safety Announcement on Sept. 20, 2017, in which it stated, “Common side effects of buprenorphine and methadone include nausea, vomiting, constipation, muscle aches and cramps, and sleep problems.”

A few months ago, the stable dose of methadone for Sarah’s medication-assisted therapy was set at 120 mg a day. But when she left town to go to work for a week her medicine was cut down to almost nothing, she said. Because she wasn’t able to go to Insight to get her medication-assisted therapy as often as she had been, this affected her dosage of methadone.

“I’m still sick every day,” Sarah said. “Take ‘dope sick’ and times it by about ten and you have methadone withdrawals–shaking, convulsions, throwing up, nausea, diarrhea, and anxiety–pretty much if you take a cold and the stomach flu and put it together you have it.”

“These are unfortunate and stigmas and stereotypes that are associated with mental illness and symptoms of addiction or a substance use disorder,” Lindner said in an email.

To Lindner, this sickness, along with the clients’ substance abuse and mental health issues do not define them.

“When we talk about our clients they are not ‘bad people,'” said Lindner. “They are people that are sick that we are trying to help get well.”