Midnight on Saturday, the line outside of Bongos Nightclub at 411 N. Cherry St. extended halfway down the block. The shooting that took place in the parking deck across the street two weeks earlier did not seem to be keeping the crowds away.

“I still feel safe, although more cautious and aware of my surroundings,” said Kimberly Romero, a senior at Wake Forest University waiting in the line outside. She is an occasional patron of the club, coming once or twice every two months.

According to Winston-Salem police, the shooting resulted from an argument between two groups of people that started inside the nightclub. The groups continued the fight in the parking deck at 402 N. Cherry St. when the club closed, where Daniel Soberanis Sanchez suffered a gunshot wound to the lower back. Marvin Jonathan Toney Jr. and Lavaughnte Quindes Smith were charged with felony assault with a deadly weapon and misdemeanor assault by pointing a gun, respectively. 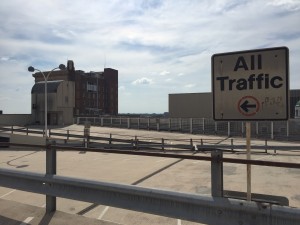 Bongos is the only Latin nightclub downtown. It promises to offer “an affordable, safe and enjoyable dancing experience” according to its Facebook page. It hosts themed events each weekend, featuring salsa, merengue, cumbia, bachata and reggaeton.

“I come here for the music,” said Abigail Cabrales who was waiting in line with a friend. She is a bartender/server at Mi Pueblo Mexican Grill, originally from California. A monthly frequenter of Bongos, she said the atmosphere and music is different than the other clubs downtown.

The people waiting outside were dressed in a mix of cocktail and casual attire, and some danced to the beat of the music trickling from inside the club. With an energetic crowd, Bongos was the center of activity on North Cherry Street. In contrast, the parking deck across the street was quiet at this time of night.

“I think the area is central and ideal for a club,” said Romero. “Although Winston-Salem can feel like an unsafe place at times, especially for a woman, I believe the club is safer than other locations.”

Mishel Gomez, a fellow Wake Forest University senior accompanying Romero, agreed. “There are police officers at the entrance of the club and they have a fair amount of security, so it feels quite safe,” she said. “I also noticed that the bouncers pat down men before walking in, so that puts me at ease.”

The club owner, Mateo Padilla, could not be reached for comment.

On a typical night, there are patrol officers lingering outside the club entrance. This Saturday, there were three. The Winston-Salem Police Department is also located close by, at 725 N. Cherry St.

“As a whole, downtown is a very safe place to include the area of the deck,” said Sergeant Kevin Bowers of the Downtown Bike Patrol. Since the shooting is still considered an active investigation, Bowers said he is unable to offer any more information on the incident or the club.

According to crime reports for the immediate area, the only other assaults with a deadly weapon occurred June 17 and August 6, each within three blocks of the club and parking deck. Those were the only two reported in within a quarter mile radius in the last six months.

Patrons like Cabrales hope the shooting will not affect the club’s business.

“I am not afraid,” Cabrales said when asked if the incident has impacted her view of the nightclub.

Previous: Crafting an Education for Kenya