The Winston-Salem City Council voted this Monday to approve a loan to downtown developer Mike Coe to assist in redeveloping the Pepper Building, located at the corner of 4th and Trade.

“I’m excited about the prospect and anxious to see it underway,” said Thiel. “The market demand is definitely in place. Its location is great because it is in close proximity to offices and extremely desirable.” 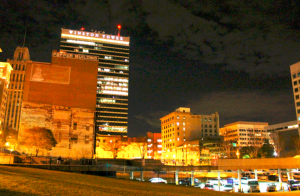 In the plans for the Pepper Building, 54 apartment units would be available for rent, six of which would be designated as workforce housing. The approximate monthly rental for the workforce housing units would be $575. The term of the loan would be 10 to 15 years on $1.6 million. The money given to Coe would be a loan to be repaid back to the city and put in the Housing Fund. Mike Coe said he will use tax credits available for the redevelopment of historic properties in financing the building, which was built in 1928 and added to the National Register of Historic Places in 2014 .

The motion passed 4-1, with Northwest Ward Councilman Jeff MacIntosh dissenting. The building is located in the Northwest Ward, part of a downtown area represented by MacIntosh.

MacIntosh said his reason for voting against the funding was that the city could use its money elsewhere.

“I think this project will be successful without our help and it’s going to be a great project when it’s done,” MacIntosh said. “Coe has done great work downtown. He is an urban pioneer.”

The vote to approve the funding occurred during a city council meeting that was attended by a large number of Winston-Salem police officers, who came forward during the meeting’s public comment period to voice their concerns about police salaries.

Lieutenant Danny Watts, a 26-year veteran of the Winston-Salem police department, pointed out that Winston-Salem officers are the lowest paid on average in the state of North Carolina, lagging about 10 percent behind.

JoAnne Allen, a citizen who has spoken out against the city council’s funding decisions in the past, asked the council, “Why is the city council becoming bankers for developers like Coe when we can’t give city workers a decent salary?”

Coe has completed many building projects downtown, but this is the first time he has asked for financial assistance from the city, according to Councilman James Taylor, Jr.

Coe said that he thinks the Pepper Building is unique because of its nostalgic architecture.

“It has 19-foot ceilings and is ornate,” said Coe. “We’re going to keep the wide hallways. We’re going to have a lady or man working the elevator, asking you which floor you want to go to, old timey things like that.”

In addition to the apartments, the building will also house a Brazilian steakhouse on the ground floor.

“I’m really most excited for the all you can eat steakhouse, honestly,” said Coe. 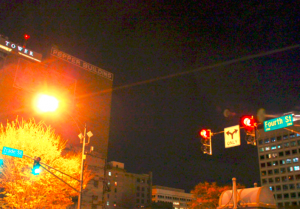 Thiel said he expects the new apartments to sell, despite the fact that they will be a block away from the new Kimpton hotel in the R.J. Reynolds building, where there will also be apartments.

“If anyone says they know where the bottom of the demand for downtown housing is, they don’t really know,” Thiel said.

Next: Plans for Workforce Housing and Healthy Food Downtown