Walking around downtown, one is sure to see many murals painted on the sides of buildings. Perhaps among these, one might notice some walls painted with bright blues, greens, pinks, and oranges swirling in the shapes of mystical geometric shapes and flowers. These are the work of local artist and Winston-Salem native, Laura Lashley. Over the past nine years, her unique and distinctive art has seeped out of galleries and onto the streets, adding to the city’s growing collection of public art.

Born and raised here, Lashley has seen the growth and evolution of the city’s arts scene. After majoring in art at the University of North Carolina Charlotte, Lashley returned to Winston-Salem in part because of the art. “Even though some of it was underground, there were tons of artists and musicians here,” said Lashley smiling. “It’s why I loved coming back, and it’s still evolving.” 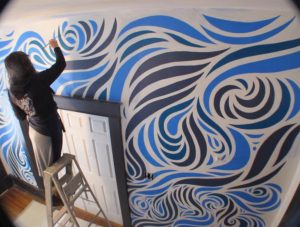 Kelly Bennett, staff person for the Public Arts Commission of Winston-Salem, also praised the city’s expanding art scene, describing the way it has grown out of Trade Street to the rest of downtown. “I think our public art shows investment and pride in our community,” said Bennett. “Downtown has turned from a nine to five kind of place to an area where people live, work, and play.”

To help her remember what years she painted different murals, Lashley pulled a thick and well-used notebook out of her bag. Its pages were worn and crammed with notes and sketches in ink of a multitude of colors. She eagerly flipped through its pages, searching for a list that would tell her what she wanted to know.

Lashley painted her first big mural in March of 2009 at what used to be the Arts Council building on Fourth Street. After being contacted by Richard Emmett, former chief operating officer of the Arts Council of Winston-Salem and Forsyth County, Lashley set out to transform a wall on the interior of the building into something special. “I tried to transfer what I’d done on smaller canvases to the wall and I really lucked out.” Although this mural may not be there any more, it was the beginning of Lashley’s continuing career as a recognizable muralist downtown. “I realized I really liked doing larger pieces like murals. I show up, start painting, and knock it out” said Lashley. “It’s satisfying.” 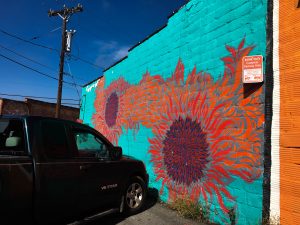 A few years later, in 2012, Lashley was asked to paint a wall outside of the Winston-Salem Rescue Mission on Trade Street. The mural, which is still there today, embodies Lashley’s unique style. The bright oranges and reds of the swirling flowers stand out against the turquoise background. This mural is painted on a wall that borders a parking lot off Trade Street. Despite the fact that it is partially obstructed by cars, its bold colors demand the viewer’s eye. This mural, according to Lashley, is really what set things off.

“A lot used to be underground, but now downtown’s art scene really has something for everyone, for all ages,” said Lashley.

Local retired resident Linda Henning stopped to admire Lashley’s mural outside Small Batch Beer Company on her way back from running errands downtown. “I think these murals and art in general gives downtown its feel,” said Henning. “It’d be boring here without it.” 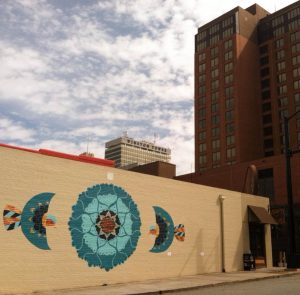 Laura is paid for her work by the businesses that hire her. Occasionally, she will donate her time and supplies, but she emphasized that she tries not to do that as much nowadays.

Like most of her other murals, Lashley’s mural outside Small Batch incorporates vivid colors and themes of nature. This is because much of Lashley’s inspiration comes from her favorite hobbies—hiking and gardening. “I just love being outdoors, hiking with my dog, that sort of thing,” said Lashley. “I get a lot of inspiration from just small stuff like leaves and branches.” Lashley’s other passion, gardening, has been something she’s carefully curated for over a decade. Since the mid-1990s, Lashley’s home has been host to a carefully tended flower garden that encompasses her yard. “I really love the colors of the flowers. I get inspiration from that as well.” 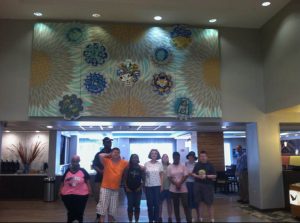 After painting the wall outside the Rescue Mission, Lashley did murals at Small Batch and Bailey Park. In addition to this, she worked alongside her husband and students from the Enrichment Center (where she used to teach) to create a collaborative mural inside the Fairfield Inn. “I really enjoyed working on the mural with my students because they’re so uninhibited. It was so cool to see what they could come up with,” said Lashley. “I think my mural at Small Batch was my favorite though. I just loved how it turned out.”

Next: A Day with the Patrons of Central Library