As soon as you enter Kaleideum Downtown, you see a backpack sitting on the front desk with a sign: Ask about our Sensory Friendly Backpacks. Inside you find a seemingly ordinary set of items: noise cancelling headphones, a pair of sunglasses, a magnifying lens, fidget toys, sand timers and a visual schedule, or a booklet with pictures of activities that you can peel and stick in order on a strip of Velcro. But these simple items are essentials for a parent with a child with autism spectrum disorder (ASD).

Crowded spaces, bright lights and loud noises can be overwhelming for children with ASD, which is why the Kaleideum Downtown offers special programming for kids with sensory processing differences. The backpacks are just one example. 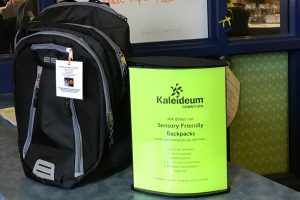 “Every child deserves to play and have fun,” says Director of Education Christine Simonson. She began working with the ABC of North Carolina a little over a year ago to implement sensory friendly programs at the Kaleideum, including one-per-month Sensory Friendly Mondays during the school year as well as themed, quarterly Sensory Friendly Nights, and a designated Quiet Room.

“My son’s official diagnosis of autism, sensory processing disorder and anxiety just happened in April,” says Laura Ferell Proctor, stay-at-home mom of two little boys, including a five year old with ASD. She visited the Kaleideum in May and checked out a backpack. “Going somewhere and seeing these programs offered is so great because as a parent taking them to a new place, you can only prepare so much when you haven’t been there yourself.”

Kaleideum Downtown’s Sensory Friendly Nights are the most popular, with their Halloween and Easter themed events attracting around 70 visitors each.

“We asked parents what events parents and their kids with ASD felt excluded from,” says Simonson, “and most said Halloween and Easter.” In response, Kaleideum Downtown put on its own accessible version of trick-or-treating and an Easter egg hunt.

On Mondays, only members are allowed, which provides a quieter, less crowded space for parents to bring their children. Families can print out their own visual schedule ahead of time to plan their visit. Photos of different playtime activities are also posted outside of most rooms – called “Choice Boards.” 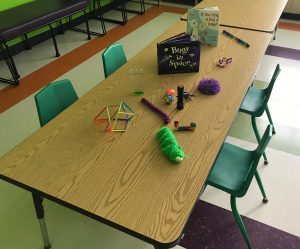 Table with fidget toys and books in the Quiet Room.

“What’s great about the museum is it’s colorful, has lots of loose parts…but that can also make it overwhelming,” says Simonson. That’s why on Mondays they turn the private party room on the upper floor into a Quiet Room, where the lights are dimmed and kids can play or listen to a story in peace.

“I think it’s really important to have these programs because there are so many more kids these days dealing with these struggles,” says Proctor. “Having these programs really helps these kids enjoy their visit there and be able to enjoy these things just like all other kids do.”

Previous: Will Kingery: Local Chef and Restaurant Owner Dishes on The Food Scene in Winston-Salem