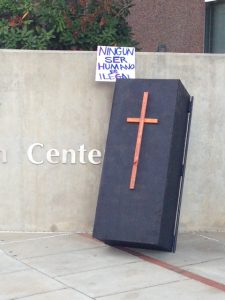 About 80 protesters, wearing black and carrying signs, gathered around a black wooden coffin in the warm evening Sept. 28, waiting for the downtown demonstration to begin.

Planned as a funeral march for immigrants who have lost their lives as a result of their deportation, protesters carried a black coffin to the steps of the Forsyth County Detention Center as a symbol of these deaths. As they marched away they chanted, “Minerva, Juana, Jose. We are here to stay.”

This was the latest event planned by a group called the Sanctuary City Coalition of Winston-Salem. The protest was held in tandem with events in Durham and Greensboro. Minerva, Juana, and Jose are three individuals in sanctuary in these cities that have united groups in the different places.

Lillian Podlog, Chris Lutz, Will Cox, and Joseph Chrobak planned the protest together. Their goal was to host an event of mourning where everyone could see, while simultaneously protesting the policies of the detention center, which has an agreement with Immigration and Customs Enforcement to house detainees.

The coalition formed in December of 2016 to advocate for legislation through the city council to make Winston-Salem a sanctuary city. This means the city would limit its cooperation with the federal government’s enforcement of immigration law.

At the protest on September 28, Reverend Oscar Xuneca of New Hope United Methodist Church talked about the struggles facing the Hispanic community.

The city council bill for sanctuary never made it onto the floor. According to Chrobak, the state legislation banned cities from enacting such legislation. The coalition continued to advocate for immigrants and refugees, with an impromptu response to the travel ban in January at the Piedmont Triad International Airport in Greensboro and celebrated the “Day without Immigrants” downtown in May. After DACA, Deferred Action for Childhood Arrivals, was revoked, the coalition once again gathered in the streets of downtown Winston-Salem.

“It seemed like immigration and refugee issues are the things everyone knows are important but nobody knows about,” said Lutz. “Our immediate goal of action to get legislation for people is still important.”

On October 9, the group met to discuss the future. Podlog, Cox, Lutz, Chrobak, and a few others were present. They began work on an education initiative that would provide opportunities for immigrants and people in the community to get connected and involved.

“Personally, my long-term goal is to integrate with the community and connect people with help and resources,” said Chrobak.

The coalition wants to focus now on building bridges between people who have the resources and desire to help with those who actually need help. They want to foster connections across groups that have the same interests and create community within immigrant rights groups.

As the protestors marched in silence down the streets of Winston-Salem last month, there were mixed reactions from passersby. Some watched in confusion, others honked their horns, and some vocalized their support. “That’s dope as hell,” said one. “We all free,” said another.

Manuel Garcia was there protesting as well.

“I think it’s important to support minorities,” Garcia said. “Immigration is something to be addressed. The government is not supportive so people need to come together and be supportive, be united. It is important to emphasize how as a community we must work together to get past barriers and access equality. No human is illegal.”