About a year and a half ago, 660 W. Fifth St. saw roughly 30,000 visitors per month. Now, only a construction crew occupies the site. This is Forsyth County’s Central Library, currently closed for renovation.

The Central Library was built in 1952. Aside from an addition put on in the 1980s, the library has not been worked on, and many Forsyth County citizens agreed that it was time to renovate. A bond referendum regarding the renovation was passed in 2010.

“It was inadequate,” said Claudia von Grunebaum, the president of the Friends of the Central Library. “And it has been for a long time.”

The Friends of the Central Library was one of the groups involved in the renovation decision-making. Von Grunebaum said, for example, that she was on the architect selection committee. The committee selected the firm RATIO Architects, which has an office in Raleigh, N.C., as well as local firm Steele Group Architects.

Sylvia Sprinkle-Hamlin, the director of the Forsyth County Public Library (FCPL) system, who also was on the committee, said “we were really happy with what we are getting and hope the community is too.” 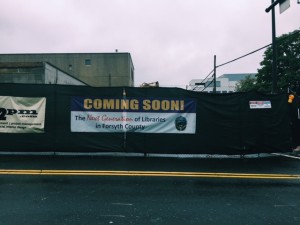 The Central Library on West Fifth Street undergoes a renovation that is scheduled to be completed by the summer of 2017.

The $28 million renovation, funded by the referendum’s voter-approved bonds, is anticipated to be completed by the summer of 2017. The renovated library will be 101,000 square feet, 16,000 more than its previous structure. The FCPL website has released pictures of the new library’s designs. (To view the album, see the link below.)

The renovated library will also keep the North Carolina Room. This room houses materials regarding local and state history, culture and literature and local and state government information, according to the FCPL website. Sprinkle-Hamlin called it “the jewel of the Central Library.”

According to Sprinkle-Hamlin, “the biggest challenge is anticipation.”

An official groundbreaking ceremony was held last Thursday morning, Oct. 1. The library has been closed since October of 2014, bringing the total time of the library’s closed doors to over two-and-a-half years. Sergeant Kevin Bowers, a downtown bike patrol officer of the Winston-Salem Police Department, has noted a change in the downtown area, specifically around West Fifth Street and North Spring Street, since the renovation began.

“I would say that [foot traffic] has decreased since it has been closed. A lot of the foot traffic has moved to the area of West Fourth Street and North Trade Street as well as other areas in the downtown area,” he said.

This should be temporary. Von Grunebaum is one of many Central Library advocates and employees that predicts an even greater influx of library visitors once it reopens.

“It will serve a lot more people and a lot more functions,” she said.

Von Grunebaum explained how she’s loved libraries, having gone since she was a child and more recently taking her children. Von Grunebaum became associated with the Friends of the Central Library through her colleague, Elizabeth Skinner, associate director of the FCPL system. Skinner approached people she knew cared about the library to become members. The Friends of the Central Library supports the library by organizing educational and cultural events, overseeing fundraisers and drives and more, according to the FCPL website, and continues its work during the renovation at a temporary location.

Von Grunebaum said that the problems with the Central Library were more than temperature control and leakage issues. It reached the point where business people would bring clients downtown and purposefully not take them near the library, she explained.

But with the renovation, the Central Library, von Grunebaum said, “will be a point of pride.”

“We’re excited about the possibility of having a 21st century library in downtown Winston-Salem,” said Sprinkle-Hamlin. “It will be the community living room.”