New Restaurant adds to the redevelopment of Liberty Street

Camel City BBQ Factory includes three levels of entertainment and dining made up of a full bar, an arcade, an events room, sit down dining, a grab-and-go counter and gaming systems included right at the dining tables. 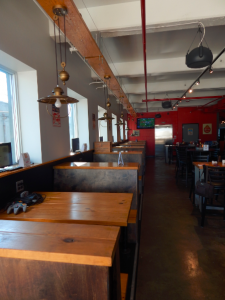 Before undergoing renovations to become Camel City BBQ Factory, Doumas said the building was formally known as Sessions Specialty, a department store, and a part of the building was a furniture store as well.

Doumas said he chose Liberty Street for his restaurant because of his family roots there. Prior to the building being Sessions Specialty and the furniture store, Doumas’ father opened a restaurant, The Dixie Grill, in the same building in 1955. The Doumas family also has ownership of a restaurant, The Lighthouse, located in downtown Winston-Salem on Burke Street.

Liberty Street lies directly east of Trade Street, a current one way street running from north to south. Trade Street is within the Arts District, consisting of shops, galleries and restaurants.

Just recently announced in May of this year, the National Cycling Center will be coming to Liberty Street and is predicted to be fully operating in May of 2016. In addition, according to the President of the Downtown Winston-Salem Partnership, Jason Thiel, there is an UPS Store under construction on Liberty Street as well. City leaders say that they expect the construction of Business 40 will encourage more development along Liberty Street.

Temporarily much more traffic from Business 40 will be redirected into downtown. With more consumers downtown, more businesses will flourish according to city officials, Thiel and Winston-Salem City Councilman, Jeff MacIntosh. A more permanent impact of the construction of Business 40 is the transitioning of Liberty Street from its current status as a one-way street into a two-way street. This adjustment will occur due to construction plans to remove the interchange between Liberty Street and Main Street as a part of the redesign of Business 40.

Thiel explained the positive impact of this change on Liberty Street. “Converting a one-way street into a two-way street always encourages a more pedestrian friendly environment,” he said. “Liberty Street can be foreseen to become more and more active, in regards to storefront usage, retail, stores and bars.”

Doumas said he hopes to create a sense of community surrounding Liberty Street and Main Street businesses. Doumas spoke of the possibility of creating a Main Liberty Trade, an organization in which businesses on Main and Liberty Street would promote and support each other and even hold events for the community to enjoy. Doumas’ sense of community was displayed by the ‘Community Bulletin Board’ on the first level of Camel City BBQ Factory as well as a local charity being advertised. Currently the proceeds raised through the donation bucket will go to support an eight month old boy, Jupiter, with a rare form of cancer. 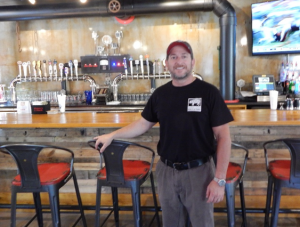 Next: Pizza, Beer and Moonlight